Time to catch up on some recent wines I’ve enjoyed. There is a wide spectrum of wines in this group and certainly something for everyone’s palate. I’m on a roll lately – these are all great wines!

Lioco Mendocino County 2010 Rose’ – I like my Rose’ and have made that clear here previously. This is one to try for those folks who turn their nose up at ‘pink wine.’ Take a sip of this ultra-dry Rose’ and you’ll forget any physical resemblance to some White Zinfandel. You might even think you’ve landed in Southern France where the Carignan grape reigns king.

This California wine is 100 percent Carignan and is just delightful. It’s old vine grapes which makes for a full-flavored wine. It’s color is closer to salmon than pink. It has just a hint of watermelon with more pronounced strawberry – not just strawberry, but strawberry picked fresh from the vine.

This fabulous Rose’ would be awesome with crackers and cheese, heavy crusted bread, grilled fish or a mushroom dish. I bought this bottle at Cork & Cracker in Indianapolis.

LangeTwins Winery Midnight Reserve – This Cabernet, Petit Verdot, Merlot, and Malbec blend is a really very nice big, but still smooth, red wine blend. Considering it’s a Lodi, California, blend, many would expect this to be huge fruit and powerful alcohol but its really neither. The alcohol comes in at a relatively modest 13.6 percent while the fruit is silky smooth and nicely balanced.

This juice was honored at a number of California wine competitions and it’s easy to see why with its nice fruit and balance. If you like a little bigger and rich, the LangeTwins is nice wine. It is distributed in Indiana.

Cantina del Taburno Falanghina – If you don’t like this white wine, you don’t like white wine. Italy produces some delightful light-bodied whites and this one is right there with  more fruit than many you may have sampled.

Okay, so you’ve never heard of “Falanghina.” Don’t feel bad. It comes from a coastal region in Italy north of Naples. The wine is smooth with nicely balanced fruit. I got a lot of pear on my palate but you might find some almond or nectarine.

The best thing I can say about this white is you’ll want to drink it. I found it online for $14-$17. I bought this wine at Grapevine Cottage in Zionsville near the higher end of that range.

Argentina has been doing these three grapes in grand style for a number of years. This a  blend that I would use to move newbie wine drinkers away from Cab and Merlot. It’s a great introduction to a varietal that has changed the entire perception of South American wines. The taste will give you a rich dark fruit and hints of pepper. The wine would pair nicely with pork or seasoned chicken off the grill. 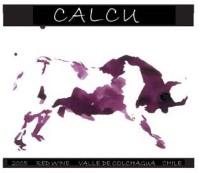 Calcu 2008 Carmenere Reserva   –  I’ve never been overwhelmed by any Chilean Carmenere. It’s different. It has a taste profile different than most wines but I’ve found most of it pretty average, but drinkable, juice. I was pleasantly surprised by this trade sample of Calcu.

This wine had nice blackberry and spice. It was smooth without a funk or harshness many previous Carmeneres left me tasting. Chile’s Colchagua Valley is one of the hottest wine regions in Chile. The Carmenere, Syrah, and Cabernet offerings are worth a try.

This wine would work with grilled meats, probably big enough for that charred steak if you want something other than Cab or a big Malbec.

Merry Merry from the Wine Shop! We added some Jolly today!
Thanks to all of our customers for their patronage this week we had a big week… The shop is closed today thanksgiving day will see you again 10 AM tomorrow morning