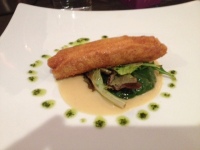 The press trip for the Millesime Bio got underway tonight with a dinner at Plaisirs des Mets in the old part of downtown Montpellier.

We had three winemakers join us for dinner and pour their wines. I’m not sure if the dinner was typical French cuisine but the group found it interesting. The group is just as interesting. We have a five Danish journalists, several from Germany, one from Finland, and a British wine writer who splits time between London and the Loire Valley. 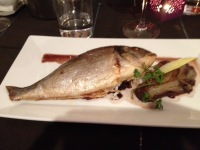 Dinner was every bit as interesting as the wines. We started with what most of us thought was some deviled crab in crispy shells – much like an egg roll. It was on some greens with a bit of sauce.Our choice of entree was simple fish or veal. I opted for the fish and it was great. The skin was crispy the white fish was really delicious and the bones were pretty easy to deal with. I didn’t eat the head – just couldn’t to it.

The dessert was off the charts. There were two rolled, crispy pastry shells filled with a chocolate grenache. One was a bit more bold than the other.

There was also a nice small foam and an uber-sweet, homemade vanilla ice cream. Some had coffeee and some did not after dessert. We all had more wine.

The wines were uneven, all organic, but for the most part very nice.

Joining us for dinner was Jean Paul Cabanis of Domaine Cabanis, who sat across form me. Marie Teisserenc of Chateau Du Luc and Virgile Joly of the winer that bears his name. Again, all are producing wines from organically grown grapes.

These are truly small producers. Cabanais, as example, makes about 8000 cases of wine annually. His Mouvredre-based wine was the best of the night for me and a couple of others. It comes from south of Nimes and the southern most appellation in the Rhone Valley. He does all the aging in cement. The wine had a delightful nose, a bit of tartness on the finish and beautiful balance.

I had Jean Paul’s wine with my fish and it was awesome. The Mouvredre blend also won a silver medal at this year’s Millesime Bio.

Jean Paul got the evening started with perhaps the most unique offering. He poured his white claret wine, a grape almost always used for red wines. It had a nice tartness to go along with a unqiue nose and finish. He sells alot of this wine to Japanese buyers to pair with Sushi.

Joly had the best white of the night for my taste. His wines were the most consistent of the night as well. His new Grenache Blanc was light and refreshing. It had light citrus and beautiful blance.

Teisserenc’s wines had prominent oak and in a couple of instances too much oak. But her ’09 Vigonier was certainly different than many you’ll find. It’s fermented and aged in oak and comes out an unusually dark yellow for this grape. It’s also an unusually high 15 percent alcohol.

Her best wine was a 2010 Chateau Coulon from Corbiers that was light with a blend of Carignon, Syrah, and Grenache. The grapes are all hand picked and handled in a manner her father started years ago.

Ok, so these producers won’t be easy to find. But it makes a point I’ve made over and over again. Seek out smaller producers and you often find outstanding wines. The wines we tasted Saturday night didn’t have any of the negative characteristics sometimes associated with organic wines – thin on the palate. Some were certainly better than others. But if I poured most wine drinkers the best of what we had tonight they would never haven known whether they were organic or not.