We’re all adjusting to the quarantine at home and adjustments that go along with it. For years I was the editor of a small Indiana daily and wrote a week opinion column. Sometimes it would just be a collection of thoughts or observations.

I live alone but continue to work about 12 hours a week at a little retail wine shop in Broad Ripple. Getting out is a real relief. We’re not allowing customers in the shop just curbside pickup and  delivery. Because of my age, I ‘m not doing delivery and just staying in locked up in the shop filling orders and answering the phone. And if you’ve read about alcohol sales, yes business is booming.

Speaking of alcohol and isolation, nine friends and I did a virtual wine tasting last night and had a ball. It was great time seeing old friends and talking wine. It’s really not hard; we used Zoom. But Facebook messenger and other platforms are out there to get a group together.

My last post was about the general dishevelment and filth at two 10th street Indy E. 10th street general merchandise stores. I posted the column to one of those neighborhood posting boards. I got a sympathetic response and a smackdown. One area resident called me a wine snob (egads!) and took me to task because the poor people working their certainly must be overwhelmed. Well, my point was aimed at ownership and management not the local workers. I suggested in these times of unemployment and with 8,000 stores nationwide perhaps they could hire at least one person to keep the place clean and organized. Very snobish, indeed. 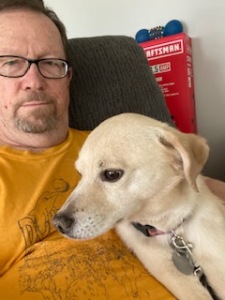 I suffered a heart-breaking loss in early March when my pet Corgi of 13 years left me for RIP – running in paradise. I weighed getting  another dog and eventually came around to the decision that it would be a good idea. I adopted a dog from an animal rescue group, Arpo, and he arrived yesterday. He’s a bit of a mystery 2-3 years old, housebroken, reserved and shy. Sake (yes, named after the Japanese wine) also loves sitting right beside me or in my lap. I’ve heard lots of ideas of what his breed might be. He’s a small guy at about 25lbs with very long legs. A neighbor thinks he has some golden retriever in him. Our adventure begins.

Friday was a big day and I make note always in case anyone in a similar predicament ever wishes to talk. It was the third anniversary of my autologous stem cell transplant. I had two rounds of lymphoma first in 2015 and again in 2016. The doctors and I selected a transplant of my own white cells to try to keep me cancer free for the rest of my life. Though an exhausting and difficult 30 days, 3 years is a significant mark of remission.

Holy gas prices caped crusader! (sorry for the ancient culture reference) All around Indy anyone out can see gas prices are way down. Imagine my delight when I found the cheapest of all just down the street! It’s been a long time since we’re seen $1.15 a gallon!