There are many compelling wine stories happening in Indiana including improving wine quality and the explosion of new wineries. There’s never been a better time for Indiana’s signature Traminette and Chambourcin.

The Indiana Wine and Grape Council is now counting 116 Indiana wineries. But there is no more fascinating story than what continues to happen at Indiana’s largest and arguably best-known winemaker, Oliver Winery near Bloomington. 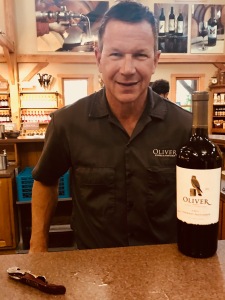 The iconic Hoosier business has long been known for its Camelot Mead and Soft Red and White wines. In recent years, Oliver’s Creekbend vineyard has produced one of the state’s best Chambourcin, some vinifera, and a Catawba that makes delightful Rose.

But the employee-owned company has big – really big – goals. Bill Oliver has not been shy in recent years to admit the team ownership would like to grow the winery to 1 million cases. Attainment of that lofty figure would make Oliver the USA’s biggest winery not located on the West Coast.

“We were producing 7,000 cases when I took over (from his father, one of the founders of the Indiana wine industry,”) Bill Oliver said. “We’ll be around 460,000 cases this year.”

He acknowledged the 1 million goal and that the company is on track to reach it in a few more years. “We’re in 27 states now. We like to talk about what we sell not just what we produce. It’s a lot easier to make wine than sell it. We have some long-term goals and we would like to be considerably larger. It wasn’t too long ago we talked about being a half million cases. That’s going to happen next year. A million cases would be nice. It seems a little grandiose but it would be nice.”

On a rainy Oct. day, Oliver stops to check out the fall pumpkins.

Oliver is talking about retail partners like the HEB ops to grocery chain in Texas. The Indiana winemaker produces thousands of cases of Porch Swing for the Texas market powerhouse. Porch Swing is a version of soft red and white with a bit of effervescence.

He has expanded Porch Swing to several other states in the last year accounting for part of the company’s growth.

But two wines really kicked things into high gear. Cherry Moscato is in its second year with 50,000 cases produced while the popular Apple Pie wine, 60,000 cases, has taken even the Indiana icon by surprise. “I didn’t see that coming,” Oliver admitted. “These two wines account for 22 percent of our total production and they didn’t exist two years ago. That’s accelerated growth!”

The other driving force behind the growth is an emphasis on sales and introducing Oliver wines in the southeast. With a stronghold now in Texas, the Oliver brand has swept across the lower states connecting to Florida where Oliver sees major growth potential.

While spreading the Oliver name across the country, the state market isn’t forgotten. Oliver has zeroed in on a couple of wines that have done well in his 50-acre vineyard. The Catawba Rose’ represents the biggest part of his vineyard. He makes, arguably, one of the best Chambourcin wines in the state.

The other quirky wine is Crimson Cabernet, a very soft and delicious wine that doesn’t taste much like Cabernet but is easy to enjoy.

Oliver admits a personal interest would be an improved and larger retail facility perhaps in the more distant future.

This story was first published in Madison Magazine, Anderson, In. It was then shared with the more than 20 newspapers which carried the Grape Sense column over a 10 year period.