Wine writers get sample wine, often unsolicited, and wine gadgets on a fairly regular basis. Just a few weeks back Grape Sense featured a look at Black Box and Bota Box wines. Shortly after that column was published a pitch for the Boxxle appeared in my inbox.

The few of the boxed wines available in Central Indiana are decent enough wines. Boxed wine is great for that single glass on a Tuesday night with whatever is for dinner. The boxes aren’t particularly attractive but most buy the wine for convenience and not as a fashion statement.

But for some folks the tacky box is just a bit much. So leave it to a North Carolina banker to come up with something a bit more elegant. Tripp Middleton, the inventor, developed a taste for boxed wines. But all that marketing was apparently too much for his kitchen counter. 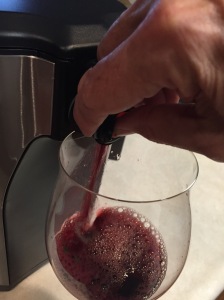 So in 2011 Middleton invented the Boxxle. Let’s get to it – essentially the Boxxle is a stainless steel container for your boxed wine and your kitchen counter. Slide the Boxxle in between the food processor and coffeemaker and it looks like any other shiny kitchen appliance.

Here is how it works. The consumer removes the bag of wine from the box. The flip-up lid on the Boxxle opens and a spring loaded platform provides the necessary mechanism to make the whole thing work. The platform is pushed down to near the bottom of the Boxxle and locks into place. The wine bag is inverted with the spigot at the top.

The spigot on almost all wine bags can be rotated. A simple 180-degree rotation of the spigot, a closing of the lid, which releases the depressed platform and the Boxxle is ready to go. The platform pushes up against the bag forcing the wine out the spigot at the shiny top.

It takes a bit of an effort to lock that platform down in place but it only took me two tries.

Inventor Middleton struggled with funding the first few years when he tried to start manufacturing and bring the Boxxle to market. But since then plenty of money came on board and the Boxxle is widely available at spots like Bed, Bath & Beyond, Target, Amazon, Brookstone, Sharper Image, and more.

Anyone who has shopped for major appliances in recent years know stainless steel isn’t cheap and neither is the Boxxle. The suggested retail price is $99.99.

Do you need a Boxxle? Well, it’s probably not needed any more than a $200-$300 Riedel crystal decanter. But wine drinkers do like gadgets. It is pretty cool gadget. It’s easy to see how restaurants would love the Boxxle. A restaurant bar could use the Boxxle for a house wine without all the marketing there for every customer to see.

If you buy a lot of boxed wine and want a great looking dispenser, Middleton came up with one. With holiday season approaching, it would make a great gift for a wine drinking friend who buys their juice by the box.