Approximately half of Indiana’s wineries sell a Traminette wine. Wine lovers can find the very sweet to bone dry examples of floral wine in stores and tasting rooms from north to south.

The hybrid wine grape may have won its crowning achievement in early August at Purdue University when Easley Winery’s 2014 Traminette was named the competition’s 2015 Wine of the Year.

Before writing off the honor as just another ribbon or contest understand the Indy competition is one of the nation’s largest. Wines arrive from 40 states and 12 countries. More than 2,100 wines are tasted during the event.

Indiana recorded 316 medals during the competition. Huber Winery, Starlight, In., was again the Governor’s Cup winner for most awards. Ted Huber was the 2014 Winemaker of the Year. But others had a big showing as well. Country Heritage and Vineyards, near Fort Wayne, took home more than 20 ribbons along with the Indiana Farm Winery of the Year award. French Lick Winery won 19 awards. Turtle Run had its best showing with two ‘Best of Class” winners, two double golds, and two golds. You can find a link for all Indiana awards here.

But after all the awards judges taste the best of the best and selected the Easley Traminette as the show’s best-made wine. The downtown Indianapolis-based winery has been on a roll with the state’s signature grape. 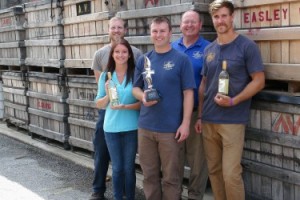 “Back in 2009 we really got behind growing and making Traminette wines,” said second generation winemaker and owner Mark Easley. “Our first Traminette grapes came out of the Kauffman Vineyards in Posey County. The vineyard was owned by our winemaker Jeff Martin’s grandfather, Harley Kauffman. When we saw how well it grew in Indiana, and the fact it was going to become the signature grape of Indiana, it was a no brainer.”

Today the Traminette grapes come from four vineyards all within 300 miles of downtown Indianapolis. “All of our grapes are planted on at least two farms so that we always have grapes even in a frost year,” Easley explained. The farms are located in Harmony, Indiana, Jennings County, Berrien County, Michigan, and Yates County in New York.

Easley produces approximately 2,500 cases of Traminette annually. Some wine or juice is sold off to eight Indiana wineries. Traminette has done so well for Easley he continues to plant. “We’ve been planting one to five acres of Traminette at three of our four farms each year over the last five years.”

Ribbons and medals help sell wine. Easley’s wife Meredith heads up marketing efforts. “Wines that are presented in a tasting room with gold medals typically get tasted more often than those with a lesser medal or none at all,” she said. She explained wine drinkers realize medals come from judges with expertise and background to determine well-made wines.

Meredith Easley said awards validate quality in the vineyard and winemaking. But the goal in the tasting room is to always find the wine a taster likes.

The Easley name is familiar in Hoosier supermarkets like Kroger, Marsh and Mejier particularly with their Raggae line of sweet wines. Their award winning Traminette can be found in many of the same stores.

In the next Grape Sense, Easley will talk about what it takes in the vineyard and winery to make his award winning Traminette.

Howard’s take on Easley Traminette: The wine is known for its floral nose and taste with apricot and even honey on the palate. For wine purists, it’s most often compared to Gewurztraminer. While too many Indiana wineries let the grapes stay on the sweet to very-sweet style, Easley’s award winning wine is far more restrained. The approach makes the wine more drinkable for those without a palate for sweet wines. (SRP $13.95)