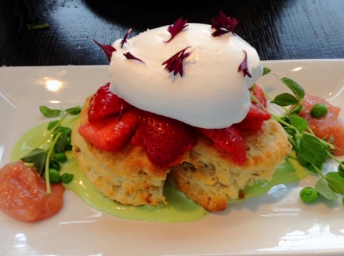 A big spoon of whipped cream atop a lavendar biscuit. 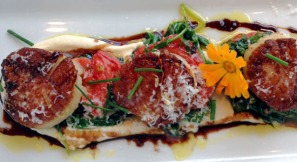 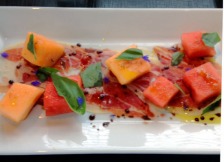 INDIANAPOLIS, IN. – The Indianapolis food scene just seems to get better and better with each new restaurant opening. It was no surprise when John Adams opened Plow and Anchor on Pennsylvania that it would quickly take its spot alongside the other city standout eateries.

Adams has worked at some of the city’s finest restaurants and drew accolades for his startup Bluebeard in Fountain Square. That restaurant was a James Beard Foundation nominee for Best New Restaurant. Adams left Bluebeard, spent some time in Louisville but has returned to focus on his unique combinations and seafood at the old Ambassador Hotel. The restaurant fills a space briefly occupied by The Bar at the Ambassador. 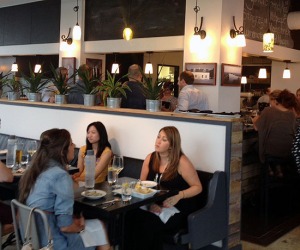 An early Saturday evening visit, because the more reasonable dinner hours were booked solid, was a roller coaster for the taste buds. Perhaps the photos above better illustrate the adventure than any words but it’s best to offer a few details of my dinner companion and our appetizers, entree’, and shared dessert.

I started with serano and melon – wonderful salty Spanish ham with fresh Indiana watermelon and cantelope. Foodies might call the presentation ‘deconstructed’ versus the normal presentation, I just called it delicous.

I usually like scallops as an appetizer, but made it my dinner choice. The seared scallops – nearing ‘well-done’ but not over cooked – were served with braised dandelion greens, roasted tomato, and a cauliflower puree’ for $32. It was magical. The only flaw in the dish were bits of the braised dandelion missed seasoning or something and was quite bitter.

Dessert didn’t disappoint with more flair for the unusual pairings which has made Adams a trendsetter in Indy. We shared the lavendar biscuit dessert with strawberries, rhubarb, pea anglaise, pea shoots. Yes, pea anglaise and pea shoots on a dessert. All I can say is it made sense in the mouth.

We enjoyed a bottle of Gerard Bertand Picpoul white with dinner, with a typcial markup from about $15 to $35. Restaurant service was polite, professional and well-timed.

The unusual mixing of ingredients presents a delightful challenge to the palate. Plow and Anchor now takes its rightful spot along several Indy dinner spots like Black Market, the aforementioned Bluebeard, and Cerulean.