JUST SOUTH OF INDY – Indiana now has nearly 70 wineries and I’ve visited nearly 25 of them. Three stops this year yielded a 1-2 record (in sports jargon, at least).

My first two 2013 stops yielded mediocre to undrinkable wine. I struggle to write about those out of a sense of fairness to someone’s livelihood but what value would anything I write be if I’m just a cheerleader?

So it was with trepidation I finally stopped at Buck Creek Winery visible on I-74, just south of Indianapolis. Let’s just say my faith was restored! 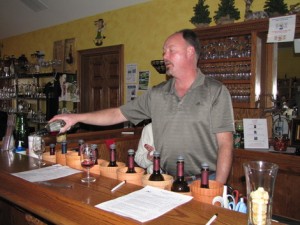 Jeff Durm retired from the Marion County Sheriff’s Department and opened the winery in 2006. But more importantly, bought the property and established the vineyard in 1991. You can see vines zipping along I-74.

Old vines make better wine – it’s pretty simple. But you still have to know what you’re doing. Jeff was a home winemaker then shadowed veteran Dr. Charles Thomas at Chateau Thomas to hone his skills.

He’s doing something right. The wines were quite good – and some were as good as any produced in the state.

The reds are what really got my attention. Durm’s “Amore” or 100 percent Chambourcin was silky smooth, bigger fruit than some Indiana versions with a lighter finish. It was darn good wine at $14.95.

Durm’s William Loyd Reserve ($14.95) is a bigger version of the basic Chambourcin with two Noire grapes added in. It didn’t have the balance of the first wine but certainly had a more complex flavor.

Jeff’s Merlot sourced from California’s Mayacamas region of Napa Valley was outstanding. Dark fruit, great tannin structure from time in French and American barrels and a really good buy at $17.95.

Buck Creek has 29 wines on their tasting sheet.

But, shaking my head while I write this, the best of an extensive wine list was a Pinot Noir. Yes, Pinot! But wait – it gets more head shaking than that. The grapes were grown near Sunman/Batesville Indiana area. It was light in a Burgundian/Oregon style. It was 100 percent correct for the Pinot grape. It was aged one year in small French and American oak barrels. It sells for $15.95. I’m still shaking my head. I brought a bottle home to try in a few days to see if my initial impression holds up. I’ll update here.

The small but beautiful tasting room and knowledgable staff help make Buck Creek a really good stop. Jeff also makes a full line of sweet and fruit wines. He entered nearly 20 wines in the 2013 Indy International Wine Competition and won medals for all but one.

And one more note, I’ll be going back to visit with Jeff and tell more of his story. But before I left he wanted me to taste a barrel sample. Joe and his son are making a traditional Bordeaux blend of Cab Franc, Cab Sauv, Petit Sirah (from Lodi), and Merlot (Mayacamas). It was stunning. I was shocked. The grapes were from the 2010 harvest and have spent 18 months in new French oak. He only has one barrel of the wine, but I can’t wait to taste it again.