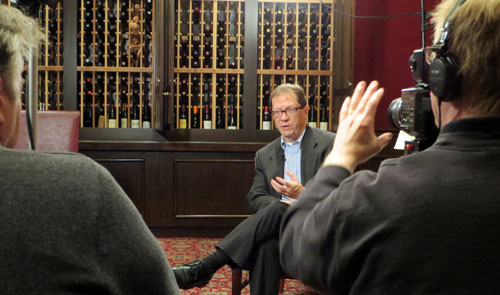 The interview was conducted at Indy’s Capitol Grille at the Conrad Hotel.

A Swiss pioneer, a bevy of Indiana wineries, viticulture authorities, and a vino-stained scribe or two are coming together in Martin Schliessmann’s IN(diana) Vino Veritas.

The project is a “documentary on American Wine – with a Hoosier Vintage” is the way Schliessmann’s describes it on the film’s website.

I met Schliessman, after a couple months of correspondance, in Indianapolis Sunday and was interviewed for nearly 90 minutes on a variety of wine-related topics. He has already visited nearly 20 Indiana wineries and plans on hitting a few more. He’s talked to all sorts of Indiana folk in and near the wine industry. He is trying to arrange interviews with Purdue University’s viticulture experts.

Schliessman is also planning to hire actors to re-enact some of Jean Jacques Dufour’s early days in the 1800s in southeastern Indiana – Switzerland County to be exact.

The filmmaker is hopeful to wrap up production on the wine documentary this summer and have rough cuts ready by fall. He sees Public Television as the most likely outlet along with festivals and other special wine-related events. He’ll also have it on a DVD for sale.

It was a great experience and I really enjoyed adding the ‘wine journalist’ point of view in response to Marty’s questions. I’ll have more on the film throughout the year.

New Amelias Bakery in Windsor Park, next to the new Kan Kan theater and bistro rocking on a Saturday morning with a line of about 10 folk.
A hidden, creepy gem of you’re into Halloween .. lots of effects and lots of creepy clowns. It’s in Highland between New York and Michigan.
Biloxi shrimp company hits the spot for a late Saturday night after work. A bit of a Kerrygold butter some garlic salt and pepper and a nice sauté… With white burgundy to wash it down a fine light snack/meal before bedtime! #biloxishrimpco
Always enjoy visiting with Ted Huber Huber Orchard and Winery. They have one heck of an October fall celebration with nearly 30,000 visitors a weekend! Lots to do lots to eat some great wine to taste had a wonderful one day trip