Growing up in Kokomo, In., and earning a management degree at Purdue University seems an unlikely path to a successful boutique winery in California’s Sonoma Valley.

But Erik Miller has achieved the unlikely career path with the success of Kokomo Wineries, named after his Central Indiana hometown. It’s a story of two Purdue roommates and a fourth generation Sonoma grape grower combining their passion.

“I had a buddy who moved out to Sonoma County when we were at Purdue,” Miller said. “I came out and visited him and just fell in love with the place. It was really weird for a guy from Indiana to come to San Francisco and all you have is public transportation. Then I saw Santa Rosa and thought it would be big enough to support a career and still small enough for me to fit in and be comfortable.” 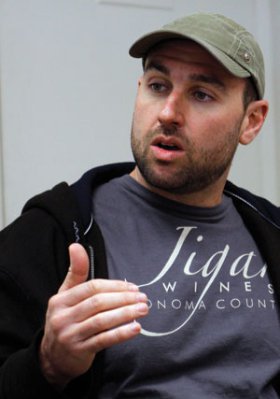 He accepted an offer to do harvest work for a California winery. “That’s how I became passionate about wine,” he said. “I worked with grapes in the outside and watched the winemaker working. I put all my effort then toward that career – being in the wine industry.”

Miller’s love for Kokomo made naming the winery easy. Working with his college roommate Josh Bartels and grape grower Randy Peters gave him a team to direct the winery’s success. He also thinks being a Hoosier has its advantages.
“I think there is one thing we have in the Midwest and it’s this stereotype that we’re hard workers,” Miller said in the modest winery offices. “That has been a connection with me and Randy and some of the other farmers out here that we’re down to earth, salt of the earth kind of people.”
Peters, on the other hand, is a fourth generation farmer. His family produced fruit and wine grapes for decades. “We didn’t have much money growing up,” Peters said. “We were growing fruit and wine grapes but working on a low margin. My dad had a second job.”
Peters credited Miller’s hard work and integrity for their ‘handshake contract’ and shared success. “The honesty and integrity of Midwestern people is true,” he said. “Growing up here I’ve always had a passion for raising the fruit but now I can see the end result.”
Growing up Peters would watch the family harvest be sold off to very large producers and dumped into 10,000 gallon tanks with fruit from all over the region. Now his grapes to go vineyard designate wines that represent his work as well as the winery. 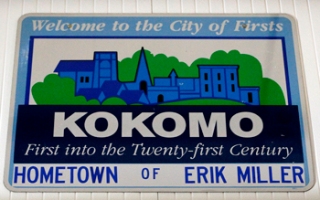 Miller makes wines widely available in the Midwest. His Cabernet Sauvignon is a big fruity but well-balanced wine that can be found in many wine shops.

“Maybe people will try the wine because the name is comforting too them,” Miller said. “We don’t spend extra money on the showboat things, the tasting room and winery but we will not take shortcuts on the equipment it takes to process grapes. We use the best oak we can buy, and make sure we’re sourcing the best possible grapes.”
Miller may have Midwestern industrial roots growing up in Kokomo but his wines have been lauded by the biggest competition in the world, The San Francisco Chronicle’s annual wine contest.
Note: In four years I’ve not done a two-part column. But if you want to learn a lot about wine, talk to a winemaker. Next time Miller will talk about some of his wine-making philosophy.