A gold medal here or a silver medal there boosts wine sales. Some wine enthusiasts dismiss medals under the ‘too many competitions to count’ excuse.
But one Indiana winery just picked off an historic honor that was unprecedented. River City Winery, New Albany, won the best wine of the Indy International Wine Competition with its 2011 Vignoles.
“This is huge,” owner/winemaker Gary Humphrey said. “This is just not Indiana. Nobody from the Midwest has ever won that honor.”

Now, before you dismiss an Indiana wine competition please note the annual contest is the third biggest in the U.S. and draws 2,600 entries from 41 states and 14 different countries. It was quite the historic moment for Humphrey and Indiana wine.

Vignoles is a hybrid grape grown widely in Indiana, Missouri, and other states. It is often used for dessert wines but also makes a nice semi-sweet wine. It often has hints of peach, pear, or apricot on the palate.
“This was first time we’ve done Vignoles so we nailed it,” Humphrey said. “We didn’t manipulate it very much in the vineyard at all. Actually the birds almost got it and we were in the vineyard picking within two hours of seeing that.

“Once it got into the cellar, we really pushed the envelope keeping it cold and doing very cold fermentations and arresting the fermentation. That keeps all that fruit flavor in there. Halfway through the fermentation I had nothing but a grin. I knew we’d have a wonderful wine if we didn’t screw it up. We spent the next few months trying not to screw up. Once fermentation was complete, that wine was excellent.”

Before you go out looking for Humphrey’s Vignoles it’s important to note he doesn’t distribute his wines. He makes more than 3,000 cases a year for his River City Winery and Restaurant in downtown New Albany along the Ohio River. The business opened in the spring of 2009.

“We don’t distribute and we have no plans to distribute,” Humphrey said. “We’re not in the bulk industry. We’re not going to make 20,000 cases to make a profit. We’re trying to keep it small with most of our batches under 500 gallons. We try to experiment and work different tanks, yeasts, strategies, see what works and what doesn’t. Then we blend or don’t blend and then make our changes for the next year.”
The 2011 Vignoles is a lovely wine with a hint of sweetness (2.5 percent residual sugar). Probably the most unique characteristic of the wine beyond the fruits mentioned above is a hint of banana. That surprised Humphrey during the tasting process until Purdue’s Professor of Horticulture Bruce Bordelon said that can be a trait of some Vignole wines.
What jumps out of the glass is remarkable freshness and extremely well-defined balance. The wine sells at the winery for $28. 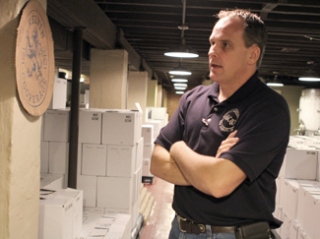 Humphrey has no plans to significantly increase his production. His restaurant has become a popular spot in New Albany behind the work of Executive Chef Nicholas Davis. The next door building has been acquired for expansion of the winery and restaurant.

Humphrey also makes two outstanding Chardonel wines, one barrel aged and the other aged in stainless steel. Even his obligatory Concord offering is significantly different getting aged in Kentucky Bourbon barrels.
Selling only from his business and in a restaurant setting allows River City to charge a bit more per bottle. You can buy wines to take home.
Next time someone bad mouths Indiana wine, they just don’t know the facts.