I don’t write much here about my real job too often but one of the joys is getting to know so many interesting young people who are students at Wabash College. Tyler Swaim, a young man who worked for me as a blogger his freshman year, was at Vintage Indiana a week ago. My schedule prevents me from attending each year. He recalled my blog and asked if I’d like him to share some impressions! I thought it was a great idea. So here is Guest Blogger Tyler Swaim, Class of 2013. He’s from Indy’s southside.

Tyler – I got got my hands on a few of the featured wine lists and we (he and girlfriend) visited about half of the booths, so I can recall some of the more interesting selections, but for us the main enjoyment was found in meeting new people.

Upon arriving at the festival, we took a few minutes to get oriented with the aid of a map and soon jumped into the shortest line we could find. All things considered, the first line we waited in seemed like the longest line of the day, although perhaps the progression of our wine tasting adventure granted us more patience. The first lady we met was a frequenter of wine and beer festivals and, taking note of our “festival virginity”, soon explained all the ins and outs of sneaking in line, including a cunning tactic for beer festivals which involves having the girlfriend politely ask inebriated men to jump ahead in line and then inviting the boyfriend to join her when she gets to the front. Although we did not take advantage of her well-learned advice, the conversation itself set the tone for several others we had with strangers throughout the day, including a discussion with an older couple regarding their trip to New Orleans.

As we moved from booth to booth, we discovered we both favor semi-sweet wines to sweet wines and that, with a few exceptions, do not like dry wines. Having only recently turned 21, we were both new to wines in general and looked at this event as an opportunity to learn more about our tastes than about the specific wines. We were both surprised at the variety of wines Indiana has to offer. From mango and pomegranate to blackberry and cider, the bouquet of flavor was overwhelming. I made a point of trying the Chambourcin at each booth as a means of gauging differences between wineries and found that, while I liked the White Chambourcin at Indian Creek Winery, there were very few others that satisfied my taste as effectively. Overall, there were three wineries that really stuck out: McClure’s Orchard, Carousel Winery, and River City Winery.
McClure’s Orchard specializes in hard ciders, but the variety within that class alone was vast. In particular, they had a jalapeno cider which was unlike anything I had ever tried, and to be honest I didn’t know what to make of it. The sweetness was very characteristic of a cider, yet the smell of jalapeno was thick and robust; it was as if I were eating a piece of apple pie with a piece of melted pepperjack cheese on top. To be sure, it was a far stretch from the Woodchuck I have come to know and love and probably something I will never try again, but the lesson learned was that wine, unlike most alcohols, has the potential to be anything. 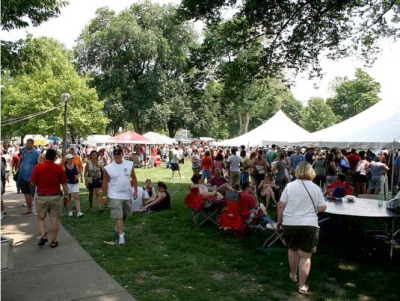 Carousel Winery on the other hand, was a far more traditional taste, though again very eclectic in flavor. Included in their vast selection were mango and pomegranate wines that did not disappoint, but for me the crown jewel was called Lady Luck. For fans of the Harry Potter series, this wine is what I imagine the felix felicis potion to look and taste like. To assign it any traditional flavor description would not do it justice, so I describe it as thus: the golden liquid caressed my palate, gently holding it in an embrace where time stopped. I never thought I’d speak of a taste as such, but the wine definitely did justice to the name Lady Luck.

Although River City Winery offered one of my favorite selections of wine, including a dry red blend very aptly named The Robert E. Lee and sweet red blend called Colonel’s Legacy, the main point of interest was in the winery itself. From the brief conversation we had with the volunteer school teacher serving wine samples, I learned that the winery is owned and operated by a couple in New Albany. The wife is a teacher as well and the husband is a police officer. It was at this point in the day that I began to really understand how unique Indiana wineries are. Unlike my previously held stereotype of wine aficiondos as being exclusively rich snobs (no offense, Howard), I began to see a side of wine that included a class of small business owners and community fellowships. This is a group that devotes extensive time, energy, and resources to providing a drink which in turn brings people together. Above all, this is what I learned from the Vintage Indiana Wine Festival.
Upon entering the festival, everyone received a souvenir wine glass which many were wearing on a lanyard around their necks. Although I thought this was a neat idea, the woman we met in the first line seemed to view them as a stigma for identifying alcoholics, suggesting that only that group of people would consider carrying the glass in their hands as too much of a burden.
While waiting in line for one of the wineries, we were approached by a reporter for Hoosier TV on Comcast and interviewed. We were asked a few questions relating our shared interest in wine to our interest in each other (e.g. What one word would you use to describe both your favorite wine and your significant other?) and then we played a game called “Wine or Not a Wine” where we were given several names and asked if it was the name of a wine or not. Being new to wine, we did not fare so well in the game.

Business is booming in Windsor Park at Amelia’s. Great fresh pastries and Tinker coffee!
Join Kathy and I for Saturday Sipps. We’ll be pouring an Italian white, Loire Valley crisp Eose’@and a second label wine from one of Italy’s premier winemakers! 20% off all three Saturday only! 11 am into the late afternoon, Sat. 24th.
It’s Saturday Sipps today at the Wine Shop! We are pouring a California Pinot Noir, a red Burgundy, and maybe the best darn Chianti you’ve ever tasted. The best part, just like each week, these three wines will be 20% off. I’ll be here pouring till late afternoon.
Hey Wine fans we’re all fired up at the Wine Shop for this week‘s third Thursday tasting. Our theme this month will be wines that are hard to spell but great tasting or if you like it better oddballs and misfits. A great chance to taste wines which probably will be new to you. And don’t forget all wines we pour Thursday are 20% off that night only. Come see us between six and 730 we’re anxious to have you part of our monthly party.