For nearly 300 years cork was the wine closure of choice for the wine industry. But synthetic corks and screw caps have made major inroads in the wine market. Cork’s downfall started in the early 80s when a Swiss researcher discovered TCA – or cork taint. Even cork industry promoters will admit cork taint does exist. But the big debate is whether it’s in a mere fraction of all bottled wine or up to 10 percent of all wines using cork closures.

There is also the phenomenon of cork taint. Too often the cork is blamed for a bad bottle of wine when a host of other factors can cause the wine to taste bad. Another way to look at the argument is how much you care if your $10 bottle of Cabernet is corked? Sure, you are aggravated it has to be poured down the drain but it’s just $10. On the other hand, higher end wines use cork almost exclusively. Last winter I had to pour out a $75 bottle of Pinot Noir I was saving for a special occasion. I was not a happy wino! 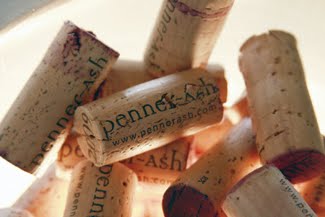 “Taint is the most misunderstood and misreported issue in the wine world “contends a cork advocacy group, 100PercentCork.org. “The taint typically associated with wine corks is TCA (2,4,6-trichloroanisole). It’s a harmless but ubiquitous environmental compound that gives wine a must flavor at very low concentrations.”

The advocacy group acknowledges cork taint but points out the contamination can also come from bottling equipment, airborne molds or chlorine-based compounds in wineries and cellars. 100PercentCork has made use of research conducted by Purdue University ‘s Christian Butzke. His research was published in the May/June 2008 Vineyard & Winery Management.

“TCA is no longer a major problem for the U.S. wine industry,” Butzke said. The Purdue Associate professor notes many bagged vegetables can be affected by the same compound but consumers write off any smell to “earthiness.”

But for many wineries and consumers the cork is out of the bottle. Plastic closures were the rage not too many years ago but seem to have fallen out of favor recently. You’ll still find many wines with synthetic corks. I often found them too soft and easily pulled out of the bottle or so hard I had to go to the gym before prying a synthetic opener out. Screw caps offer a great alternative. A screw cap eliminates oxidation but the jury remains out on how well wines will age with a screw cap. Conversely, most wines in a screw cap are at the lower end of the price scale and unlikely to be put down for aging.

I purchased a wonderful and relatively expensive bottle of Pinot during a recent Oregon trip and it had a glass closure. Glass stoppers don’t require an opener and provide a tight seal with a plastic liner. Oxidation is still under testing but appears to hold up over time. It also provides a nice look of sophistication.

Cork has lost market share to these new closure products. But it’s hard to imagine the great wines of the world ever using anything but cork. There is plenty of scientific evidence, not to mention the romance, of popping a cork from a fine bottle of wine with little worry.

For consumers and Grape Sense readers, you are sooner or later going to buy a bad bottle of wine. But your concerns and efforts are better used on selecting a good value bottle than worrying about cork taint.

After three years driving N College Ave, Stop by this morning to see the Kennedy-King Memorial in the park at 17th and College. It commemorates Robert Kennedy’s remarks the night Martin Luther King was assassinated. Shame on me for not getting there earlier… But it is something everyone ought to stop by and think about the moment and think about the things happening today in our world
These little shrimp from a nearby Clearwater Publinx market far better than what Kroger has in landlocked Indiana crazy huh? A bit of Willakenzie Pinot Gris goes well with warm air and the shrimp
Trying to avoid a oz@plete@fry at poolside - Sun cream applied… Prosciutto and some baguette in the bag and a nice Provonce rose Florida vacation living for another couple days
Having the iconic grouper sandwich at Clearwater’s equally iconic French’s Cafe.