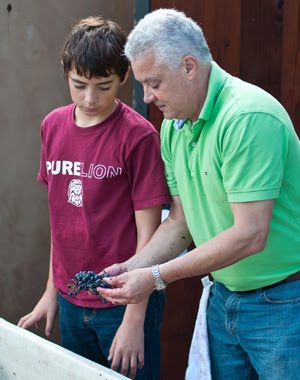 But the story of 13-year-old Colby Groom touches the heart in a way different than corporate charitable efforts. When Colby was barely 10 years old he had back-to-back open heart surgeries. His remarkable recovery and generous spirit now drives his father and others to raise money for charities that promote heart health.

After recovering from the life-threatening challenges, Colby now promotes a red wine blend bearing his name – Colby Red. The boy asked his famous winemaking father if they could make a wine to help raise money for Heart Disease charities.

Daryl Groom is certainly no doting father humoring his ill son. Groom is a world class Australian winemaker who worked for Penfolds before coming to the U.S. in 1990 to work for Geyser Peak and Beam Wine Estates.

The project really took off after a February appearance on NBC’s Today Show. With Walgreen Drugstores on board as a national corporate partner, suddenly 20,000 cases of a California red wine blend didn’t seem like enough.

“Honestly we have been blown away and are quite humbled by the tremendous support Colby Red has received from consumers, trade and media,” Daryl Groom told Grape Sense. “People love the wine and they really want to support the cause. We get lots of emails and Facebook messages daily.

“Because of the support so far this year we have raised $115,000. This is a far cry from the $500-$1,000 my son and I were hoping to raise when he first conceived the idea. Of the $115K raised we have donated $72,000 and quite an additional amount of product to heart related charities across the country.”

The wine, with a suggested retail price of $12.99, can be found in wine shops, liquor stores, and in Walgreen stores across the nation. Of course with a “suggested” retail price, don’t be surprised if you find the wine at a lower cost.

All of the project’s profits go to Colby’s charity. But for a proud dad, there’s more to this project than selling a lot of wine for a good cause.
“Aside from raising the money for worthy charities, which puts a huge smile on our faces, my family has been rewarded immensely in watching our son Colby grow with the process,” Groom said. “From being so fragile post-surgery to a young man who gets on stage at heart benefit balls around the country and confidently and proudly tells his story to help others.”

You can learn much more about Colby Groom, the wine, and the project at colbyred.com and on Facebook at Colby Red Wine.

Howard’s Pick:
Colby 2009 Red Blend, $12.99 – There are no excuses not to try this fruit-forward red wine if you live near a Walgreens. The wine is a cuvee of Cabernet Sauvignon, Zinfandel, Shiraz, Merlot and Petite Sirah. It’s big fruit with soft edges and very enjoyable finish. And by the way, it’s a very smooth and wonderful glass of red wine!