Several boxed and packaged wines have appeared on the market over the past few years. Heck, you can even buy wine in a can-like container.

I have written previously about the Octavin Home Wine Bar and felt compelled after a couple more samples to re-visit the wines. I was more careful with the last two wines to make a few notes within the time frame and how they held up over the promised six weeks of freshness. 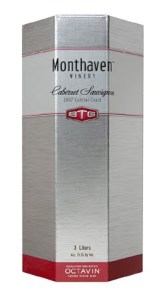 Recently I had the Montahaven Cabernet and Seven, which is a blend of seven Spanish wine grapes.

The most remarkable thing about the boxed wines is the price and consistent quality. The suggested retail on all of the Octavin products is a couple of bucks past a twenty dollar bill. You can find them in some retail outlets as low as $17.99. The price is remarkable when you consider you’re getting four bottles of wine.

The other startling thing about the Octavin wines is the preservation system works. With the last two wines, I dated the box when I opened it and made a few notes each time I poured a glass. In both cases the wine tasted virtually identical from week one to week six.

The wine-in-a-box system works well for the single wine drinker or for a big party.

The wines have been about what you would expect, but better than many others at the price point. The two most recent samples were two of the best. The Monthaven Cabernet had nice berry flavor with little finish but it was great to be able to pour a single glass of Cab without popping a cork. The Seven was actually a bit richer on my palate. Bodegas Osborne’s Jose Maria Nieto blended primarily Tempranillo with six other grapes. This wine probably had the best finish of the bunch.

But that was followed up by Silverburch Sauvignon Blanc that was the best wine I sampled. As a matter of fact, that Sauv Blanc was as good or better than many I’ve paid $12-$15 for in retail stores.

The Big House Red and Big House White have been around awhile and are delightful value blended wines. I enjoyed both. The Boho Vineyard’s Zinafandel was pretty thin but I did find myself going back to the container to finish it off.

I haven’t tried the Pinot Noir but I would say there really was only one stinker in the bunch. The others are decent wines and a couple darn good values.

Again, it is what it is. Just over $20 for four bottles of wine is tough to beat. The convenience of pouring a single glass is wonderful. The wines are better than many you’re going to taste for the same bucks.

If you haven’t tried boxed wine in years, it’s time.