New Winery with a Hoosier Connection
This is going to be a rather long entry I may update over next few days. But there wil be several sub entries throughout.

My day in the Valley started with a visit to Chris Baker at one of the state’s largest wine production facilities in Dundee. Dundee sits along Highway 99 a collection of old buildings that used to be a hazelnut production plant. 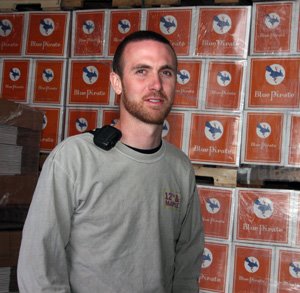 The operation makes the wine for a number of Oregon wineries. They don’t talk alot about what specific wineries, leaving the mystique in place that the folks behind the label make every bottle. But they have several labels, own vineyards and may become one of the biggest in the business outside of California.

Aron Hess is the chief winemaker who has his own winery (more on that below) with Baker as assistant winemaker.

Baker and brother Craig have just started their own label – Ancient Cellars. I met Craig in Bloomington on Saturday at a taping of a video blog for Hoosierwinecellar.com

Craig lives in Indianapolis and is working the marketing end of the new venture while Chris makes the wines. He gave me a tour of the facility which was really fascinating. I’ve toured wineries but nothing like this place that last year made about 140,000 gallons of wine. Obviously, everything is on a different scale.

And each time you visit any real wine making operation you come away with a new appreciation for the amount of labor, love, and chemistry needed to make good wine.

Chris hopes to grow the Ancient Cellar label. Right now the Pinot Gris is in release and available in Indiana. The Pinot Noir has only been in the bottle a few weeks and will follow. Chris has Cabernet Sauvignon and Cabernet Franc in oak barrells aging now for future release. He hopes the label can grow from a a couple hundred cases to a few thousand necessitating a tasting room and Willamette Valley commerical presence.

I am going to write more on Craig in the future.

Daedalus Cellars, Dundee, Oregon
I went from the wine production facility almost across the street to Aron Hess’s tasting room for Daedalus Cellars. He has had a hand in many Willamette Valley wines through his young career including Rex Hill.

He has one real niche wine that stood out for me during the tasting. He is making a Gruner Veltliner which is usually associated most with Austria. It is a lighter minerally wine with a bit of a white pepper finish. I’ve not drank much through the years but thought his was really outstanding. And, I learned there are only two vineyards growing the grape in all of Oregon. He had a range of nice Pinot Noir. I was impressed that he had a $20 offering that was not being tasted today but available for purchase. His $32 Willamette Valley Pinot was a great wine at the price point and I grabbed one at that price.

Daedalus can ship wines to Indiana.

Grape for Charity
You meet the most intersting people in wine country! A gentleman was tasting at the wine bar when I entered Daedalus. We started chatting about the wines and why he was visiting. He is a member of the Oregon Mozart Players and was buying wine for the 18th Annual Dinner and Benefit Auction for the organization. He was in the process of buying one wine from every Oregon winery and said he would reach 175 bottles of wine some time this day.

I wonder how you get that job? You can go to the organization’s web page and bid on items for the April 10 auction which includes items like a trip to Paris, and many other wonderful products, trips, and services … and oh, wine!

I had not heard of the winery before today but have to say their moderate to expensive bottlings hold up against any I have tasted.

Steve and Paula Black are the owners and the winery’s unique name comes from the couple’s four daughters – Alexis, Vanessa, Christiana, and Jillian. Brother Nicholas is the “Keeper of the Four Graces” according to the winery’s marketing materials.

The tasting room was the most lively of the three I visited. People from Georgia, North Carolina, Califonia, and other states were in and out the short time I was there talking wine with other visitors.

The sales manager Jason Senior, an Aussie native, kept the pours coming and the information about the wines and family flowing. They make the obligatory Pinot Gris, doesn’t everyone, but also a really beautiful Pinot Blanc that I loved.

There Pinot Noirs were all goregous wines in the $30-$75 price range. I bought a bottle of their Doe Ridge Estate Pinot that’s one of the best I’ve ever tasted.

Four Graces does not currently ship to Indiana, but Jason said they expected to add the state when they sort through the laws. (You hear that a lot!)

Winderlea Winery
This stop was a repeat from last year with the husband and wife team of Donna Morris and Bill Seat. Winderlea is just in its second-year release with beautiful Pinot Noir offerings. 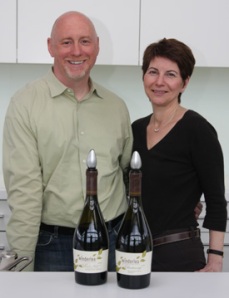 I spent a good amount of time with the couple last summer during my visit and although their tasting room is not yet open they set up a pour for me during this visit.

I was just blown away by their 2007 Chardonnay. They made just 345 cases of the wine that retails for $30. It does not have the big oak characteristics of a California Chard yet more body than most of the Chardonnays you’ll taste here which are aged laregly in stainless steel.

This is their first Chardonnay offering and has already landed in one of Boston’s top French restaurant’s wine list. It is an interesting interpretation of the old standby grape.

They poured their three Pinot Noirs for me and I was particularly taken by their 2007 ANA Pinot. It was a nicely structured wine that was light on the palate with a big Pinot flavor. It was beautiful on the nose. The wine comes from some of the great French clones planted in the Dundee Hills. It’s a marevlous wine at the $45 price point, if compared to some wines in the $60-$80 wines you taste up and down the country roads of the Valley.

I spent a good deal of time with the couple today and will do an entire newspaper column on them in the near future. Unfortunately, their wines are not yet available in Indiana. But they’d definitely like to widen their distribution and grow the winery to near 5,000 cases. They have done 400, 1,600, and 1,300 with three vintages. So lots of opportunity to grow.

Their wines are premium Pinot Noir which dominates a large portion of the Oregon wine production in these hills.

I keep nagging. Maybe we can find enough Hoosiers to make the licensing process profitable.

I really enjoy staying in bed and breakfast accommodations whenever possible. I learned about Dundee Manor on the internet and since have had nearly every wine person I’ve talked to praise the efforts of Brad and David and assured me I’d be well taken care of at the Manor. They were right. This 100-year old home is stunningly beautiful with incredible and tasteful antiques and decor.

The “Two Gentlemen on the Hill,” as described in some of the advertising also built a beautiful kitchen, manicured lawn and gardens, and top notch client service. No, I got no break because I’m gushing. I’ve stayed in a few of these places and the Manor is tops.

Tina’s Restaurant
If you come to the Willamette Valley someone is going to recommend you have dinner at Tina’s Restaurant right on Hwy 99 in Dundee. And it’s more likely several people will tell you if you’re having just one meal or one night here, it’s got to be at Tina’s. Listen to those people carefully.

I didn’t get there last year because I was under the weather. I did tonight and it was one of the best meals I’ve had in some time. Allow me to go all “foodie” for a moment and share what I enjoyed.

Great wine is meant for great food. Tina’s has its own Pinot Noir label but its made from grapes sourced from many of the same vineyards as the area’s other great Pinots.

I started with grilled scallops wrapped in a smoky bacon. A beautiful and fresh salad of greens with a light vinagrette, parmeson cheese and Oregon’s hazelnuts. For my entre I had a beautiful roasted duck breast served with carmelized onion rosoto and braised greens. The duck was moist, tender and just perfectly cooked with a tad of pink/red in the middle. The skin was crispy.

Paired with the Pinot it was a delightful meal. Not cheap at $51, but I can say I have paid the same or more for less quality.

I start my Thursday with a visit to Lange Winery and a chance to sit down and talk to Jesse Lange. Then I’m off to Carlton a little farther to the west for s handful of winery visits that promise to be special. That will be Day 2!